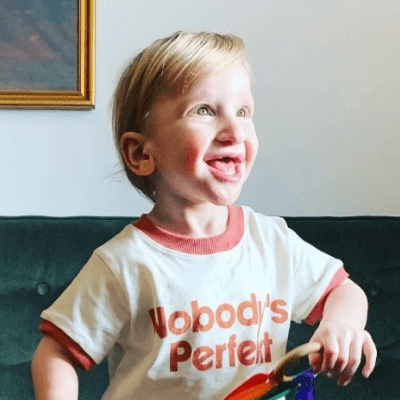 As in the case of Lennon, learning about MWS has been a slow and difficult journey. However, there are some things parents can do. After receiving a diagnosis, it’s important to work with your child’s pediatrician and team of specialists to develop an active management plan.

“Lennon was born at 38 weeks and 2 days in 2018. Instantly, we noticed a few things were different. He had extra folds of skin around his ears and neck, his eyes were slightly spaced out, he had a wide nose and undescended testes. He also had intestinal malrotation (also known as twisted intestine), feeding issues, and sleep problems. We met with a genetics team who tested him for a couple genetic syndromes. The tests came back negative, and the team saw no reason for additional tests. When he was stable enough, we were able to take him home. We left feeling hopeful.”

“The feeling of hope was short-lived.”

As told by Kayla, mother to Lennon who was eventually diagnosed with Mowat-Wilson Syndrome‍

What is Mowat-Wilson Syndrome?

Children with MWS are usually happy in demeanor and love interacting with other people.

MWS patients have similar facial distinctions (unique looks) that include a square-shaped face, deep set, and widely spaced eyes, a prominent and pointed chin (standing out), a broad nasal bridge, large and flaring eyebrows, and uplifted earlobes with a dimple in the middle.

Sitting, crawling, and walking is significantly delayed in MWS patients. All patients with MWS develop some degree of intellectual (learning) disability and most will be severe.

Learn more about the signs and symptoms of Mowat-Wilson Syndrome

Each of our cells contains 46 strands of DNA. Each of our DNA contains millions of nucleotide sequences, called genes. Our genes provide instructions on how to create essential proteins that are responsible for building our bodies from the inside out.

MWS occurs when one or both ZEB2 genes are damaged. The ZEB2 gene provides instructions on how to create a protein that plays a major role in the formation of tissue that develops into the nervous system and organs, like the intestines and heart.

How is Mowat-Wilson Syndrome diagnosed?

A diagnosis of MWS can be made based on symptoms but can be confirmed through genetic testing that identifies a mutation in the ZEB2 gene.

Is there a cure for Mowat-Wilson Syndrome?

Currently there is no cure for MWS. Patients are treated for their symptoms, not for the underlying cause of the disease. Medications and therapies can be used to alleviate symptoms. MWS advocacy groups are working to collect patient data so researchers may analyze the findings and a cure may be found.

How is Mowat-Wilson Syndrome managed?

“As we digested the news, we felt at peace. We wouldn’t change anything about Lennon. He has taught us more in his 2.5 years of life than I learned in the 23 years before he came. He is our entire world, and we can’t wait to see him continue to shine. We hope to have more children and plan to raise them to be kind and emphatic to others.

Currently, what we struggle with the most is information and education about Mowat-Wilson Syndrome. None of our doctors had ever heard of it. No one in our community has had a child with this syndrome. Lennon has gone through so many tests and procedures. It is even more frustrating to realize how much he endured before we even had a diagnosis. We vow to learn more about rare diseases and to advocate for our son.”

As in the case of Lennon, learning about MWS has been a slow and difficult journey. However, there are some things parents can do. After receiving a diagnosis, it’s important to work with your child’s pediatrician and team of specialists to develop an active management plan. The management plan will include guidance on how to handle different situations, and protocols to handle unique needs.

See if you or a loved one qualifies for free genetic services and join our community today.

Are you a healthcare professional?

Please note that AmbitCare provides this information for the benefit of the rare disease community. AmbitCare is not a medical provider nor a health care facility. AmbitCare can neither diagnose any disease or disorder nor endorse or recommend any specific medical treatments. Individuals must rely on the personal and individualized medical advice of their qualified health care professionals before seeking any information related to their particular diagnosis, cure, or treatment of a condition or disorder.